Which is better, WordPress vs Drupal?

It depends on who you are and what you need. Drupal and WordPress both have their strengths and weaknesses. To help you choose which is best for your specific needs we split this article up into sections that address different users. To learn which platform is right for you, keep on reading to learn how your choice will affect different types of users. 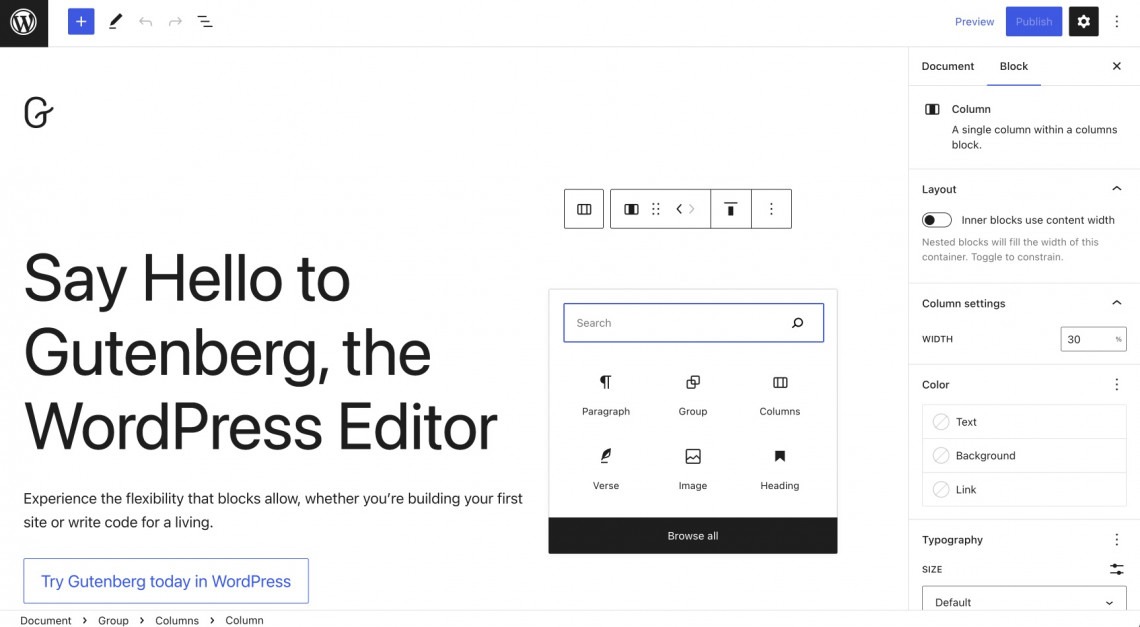 Since the beginning of internet times, WordPress is known as easy-to-use and Drupal is known for its steep learning curve. This sounds like it's an easy win for WordPress, but Drupal is slowly but steadily closing the gap.

Drupal 10 comes with a new admin theme "Claro" that in our opinion is comparable in user-friendliness to the WordPress admin theme. Moreover, we like to install the Gin admin theme which is designed by the same guy who made the Claro default admin theme. The Gin admin theme adds cutting-edge UX improvements as well as a dark mode to your Drupal site.

WordPress offers many different page builders that empower content marketers to create the types of modern service/landing pages that consumers expect in 2023. Depending on how technical you want to get you can choose Elementor, Divi, or Oxygen. These tools give content editors the power to translate their story-telling talent into beautiful mobile-friendly pages, without needing support from expensive software developers.

Drupal comes up short: there are fewer choices for ambitious content editors. At DXPR, we have been working for 6 years on our Drupal page builder and we think it's comparable to Elementor but not quite the same. One alternative for Drupal is the Acquia Site Studio suite but it's only available to Acquia Cloud clients. There is a Drupal port for the Gutenberg editor from WordPress, but Gutenberg is not a true page builder because it lacks layout and styling tools.

Which is better for site builders?

Before we get things mixed up let's talk about what we mean by site-building. We are talking about setting up the "back-end" architecture of the website. We consider this separately from page-building and theming.

With its sophisticated content types, user permissions, views module, and layout builder, Drupal has the dream team of site builder tools. It's possible to get similar functionalities in WordPress through third-party plugins, but they won't work like a team. WordPress plugins are not designed with interoperability in mind.

In Drupal, everything is more modular and flexible, and components are more finely tuned to integrate with other components. This makes the Drupal tool of choice for building websites with lots of pages or structured data. Do you want to add a webinar section to your website? showcase dozens of case studies that are searchable and filterable? Drupal does it better and faster.

Drupal also comes standard with multilanguage tools, whereas WordPress depends on a third-party plugin for the equivalent.

Content marketers and digital marketers need more than just a content editor or page builder tool. As a marketer, you have to get eyeballs on your page. Make numbers go up.

In 2023 you can trust both platforms to render SEO-friendly markup, not just with "alt" and "title" attributes for images but with HTML5 accessibility features, metatags, and proper use of redirecting. Technology has advanced such that you don't need to worry about this anymore, both systems handle this very well.

The great advantage that WordPress has is a plugin called Yoast SEO. With over 25.000 5-star ratings, it is easily the most popular WordPress plugin in the WordPress ecosystem!

The only thing Drupal has that comes close is... Yoast SEO for Drupal. A Drupal port is available but it lags behind the WordPress version, lacks some of its features, and has bugs and usability issues.

Which is better for software developers?

Drupal 8 core is the work of more than 3300 contributors in over 16,000 Drupal core commits during nearly five years of development, and it is by far the best release of Drupal yet

8 years ago, Drupal had a reputation for using outdated software architecture for their PHP back-end. To gain popularity with software engineers, Drupal's lead made a hard decision: Drupal 8 was to be rewritten from scratch with modern software architecture. It took 5 years but the result is a solid architecture that has proven scalable, flexible, and favored by the wider PHP programming community.

WordPress has not had such an overhaul. Maybe the WordPress community prefers the older and simpler "functional programming". Or maybe WordPress is afraid that their enormous 3rd party plugin ecosystem won't be able to rewrite all their code to keep up with a rewrite of WordPress architecture. Back in 2015, not everyone in the Drupal community was happy with the rewrite...

It's a lot to ask your community, to invest in learning and developing with an all-new, more complex software architecture. Especially since we can never be sure the resulting rewrite is going to be a success.

Which is better for small business owners?

WordPress is easier to set up and customize than Drupal until you need o implement a custom structure for your content and data. Once you start needing multiple content types, and different user roles with different permissions, Drupal becomes the easier software to customize for your needs.

The thing is most small businesses don't need a lot of custom structures. If your website is fairly simple, and you don't have plans to grow it into something more elaborate, then WordPress is the better choice.

If you build a WordPress website there are many off-the-shelf designs available, called "themes". These themes can set you up with a decent-looking website on a small budget. With Drupal, you will typically have a custom theme designed and developed. Drupal also has paid themes or highly customizable themes that can match your branding without custom coding, but there are far fewer options.

Which is better for CIOs?

As CIO your main concerns are platform scalability, uptime, security, compliance, and trying to get more done with a limited supply of IT talent. Which CMS is the better one for your enterprise?

Since WordPress is the most used content management system to date, it is also bound to be the target of many cyber attacks. When it comes to security, WordPress has three areas of concern, the core, plugins, and themes. The core is developed and secured by Automattic (the company behind WordPress). This means experts are working to keep the core secure. WordPress plugins and themes are made by community members, which means that there is an increased chance to suffer a malicious attack by installing a certain plugin or theme that has an undiscovered vulnerability.

A survey from Wordfence demonstrates that WordPress plugin vulnerabilities accounted for 55.9% of all known entry points for malicious actors. Overall, WordPress was the content management system used by 74% of the hacked websites that Sucuri analyzed. You can mitigate these risks by not relying on too many plugins and keeping theme development in-house.

Drupal is recognized as one of the most secure content management systems. This is partly because the Drupal security team works on managing vulnerabilities in both the core of Drupal and modules contributed by the community.

Drupal modules and themes are also more vulnerable than Drupal core but you can reduce your risk level by sticking to stable releases of modules and themes. Watch for the text "Stable releases for this project are covered by the security advisory policy." which will show at the bottom of contributed projects that opt into the security policy. Not all projects will have this.

WordPress vs Drupal: Scalability and Deployment

Depending on the scale of your organization you may be responsible for dozens or hundreds of websites. This is where automatic deployment capabilities become important. Drupal 8 and higher have a YAML-based configuration management system that really helps with deploying pre-configured websites based on your organization's preferences.

When it comes to deployment automation, commercial Drupal cloud providers Acquia and Pantheon.io provide sophisticated tools that are proven to scale up to hundreds of websites.

On the WordPress side, you can get scalable deployment automation from WpVIP.com. This enterprise WordPress service provider is relatively new to the game and not quite as "proven" as Acquia with its 15+ years of history.

WordPress vs Drupal: According to Forrester and Gartner

Forrester and Gartner are technology research firms and have a big influence on CIO decision-making at the high end of the market. Let us compare their CMS market evaluations. We see that Acquia, the company behind Drupal that is led by the Drupal project lead is seen as an industry leader by both Gartner and Forrester.

Automattic, the company behind WordPress that is led by the WordPress project lead appears as a strong performer by Forrester but has not yet appeared in Gartner's Magic Quadrant for CMS. 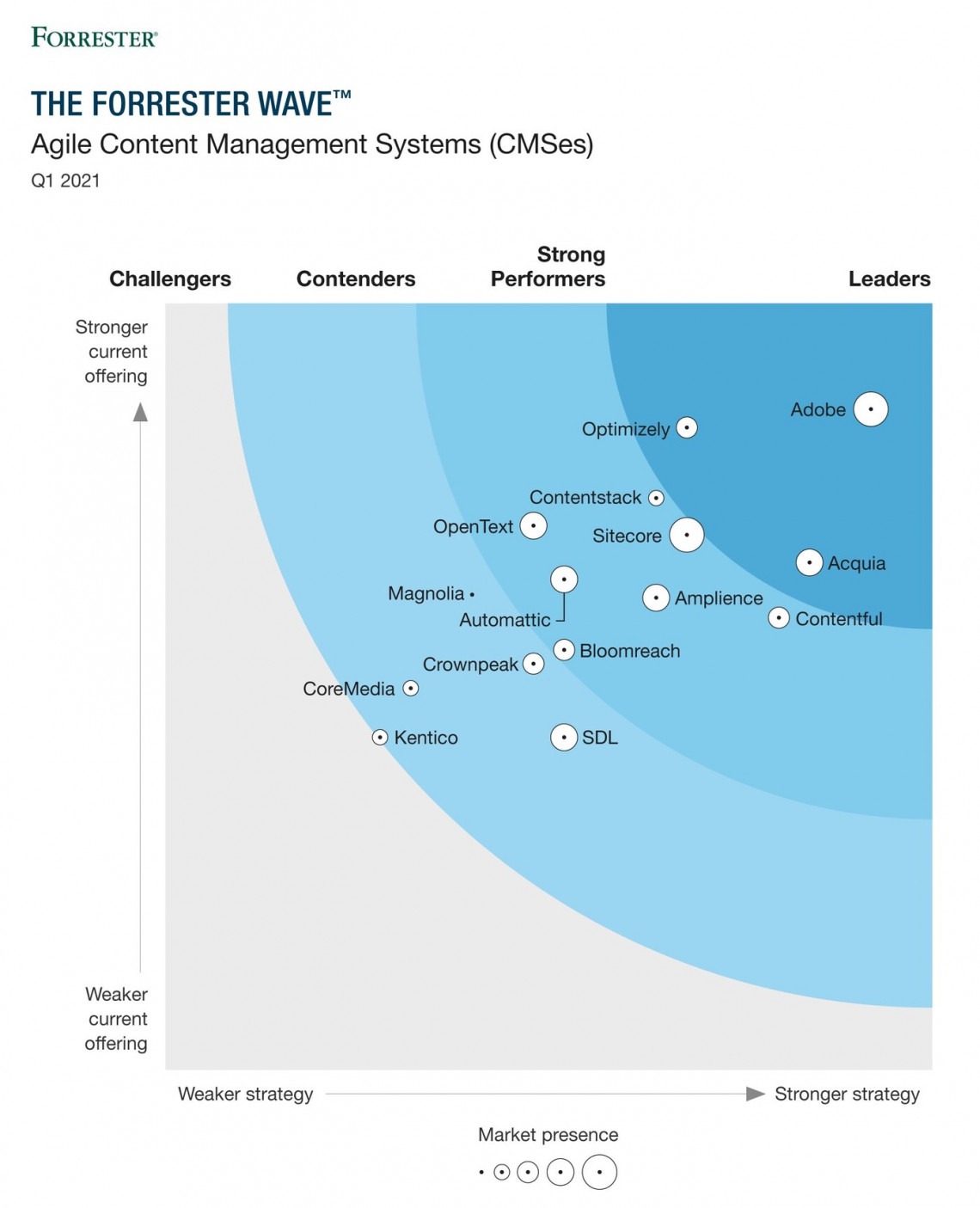 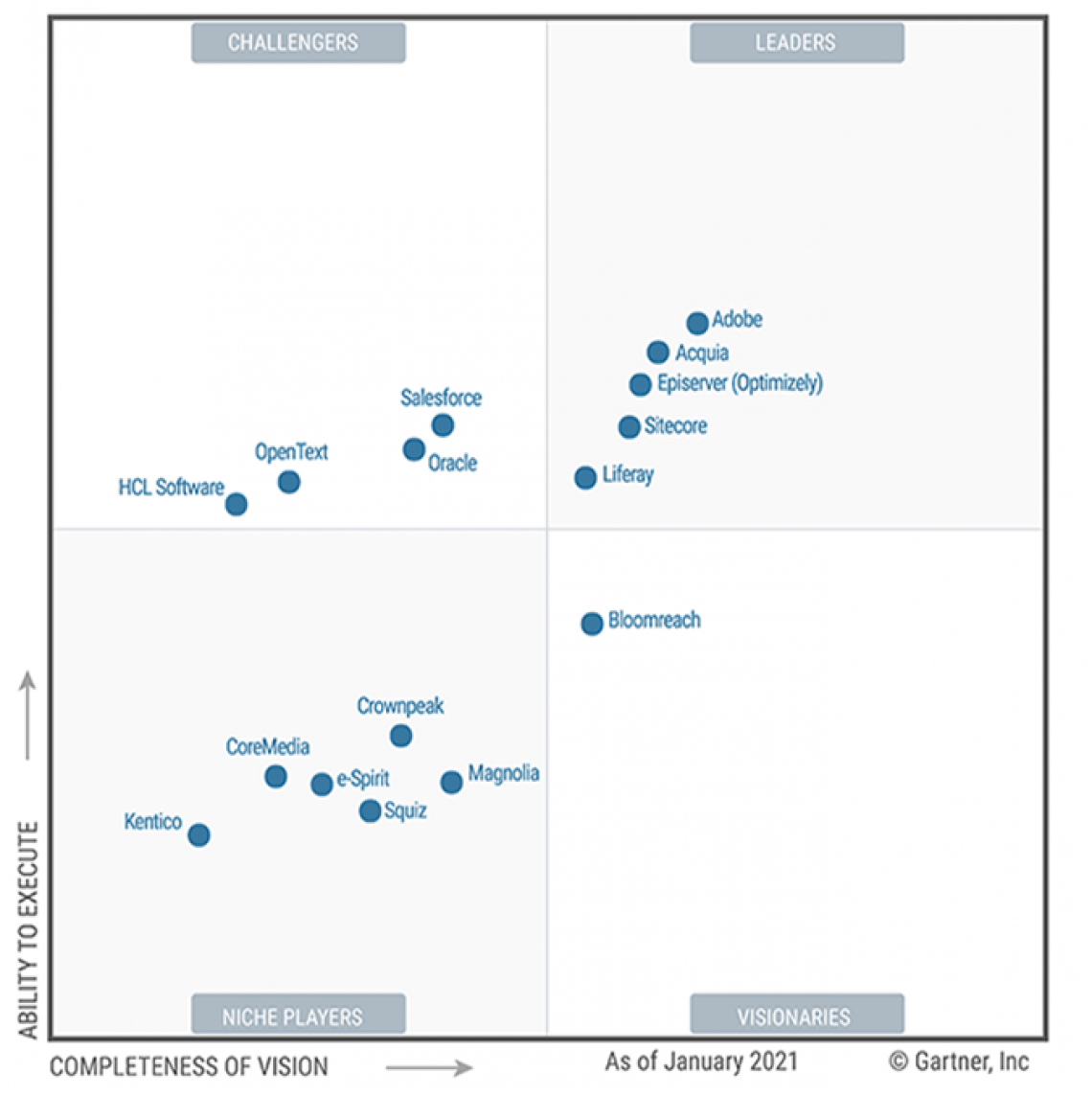 Which is better for CMOs?

As Chief Marketing Officer it's always a challenge to push growth numbers with a limited supply of marketing talent during a period with all-time-high employee turnover rates. You need a platform that empowers your marketers to do their job effectively and efficiently, without causing a headache for IT.

In Drupal it's easy to set up publishing workflows with the workflow module. You can set up states such as draft, pending review, pending translation, reviewed, published, etc. You can then select which users get notified when it's their turn to work on a piece of content, and you control who can access content in specific workflow states.

In WordPress, there is the PublishPress plugin which offers similar capabilities. This plugin restricts some of its features to a paid version of the module. The concern with WordPress is that plugins from different authors are not necessarily designed to play nice with each other. The PublishPress website does not list on their website how the plugin works with WordPress multilingual features that are coming from a different plugin, from a different author.

In the Drupal ecosystem, interoperability is considered to be of paramount importance. Therefore we can be sure that workflow states will work in perfect harmony with multilingual features, SEO features, and page builders like DXPR Builder. 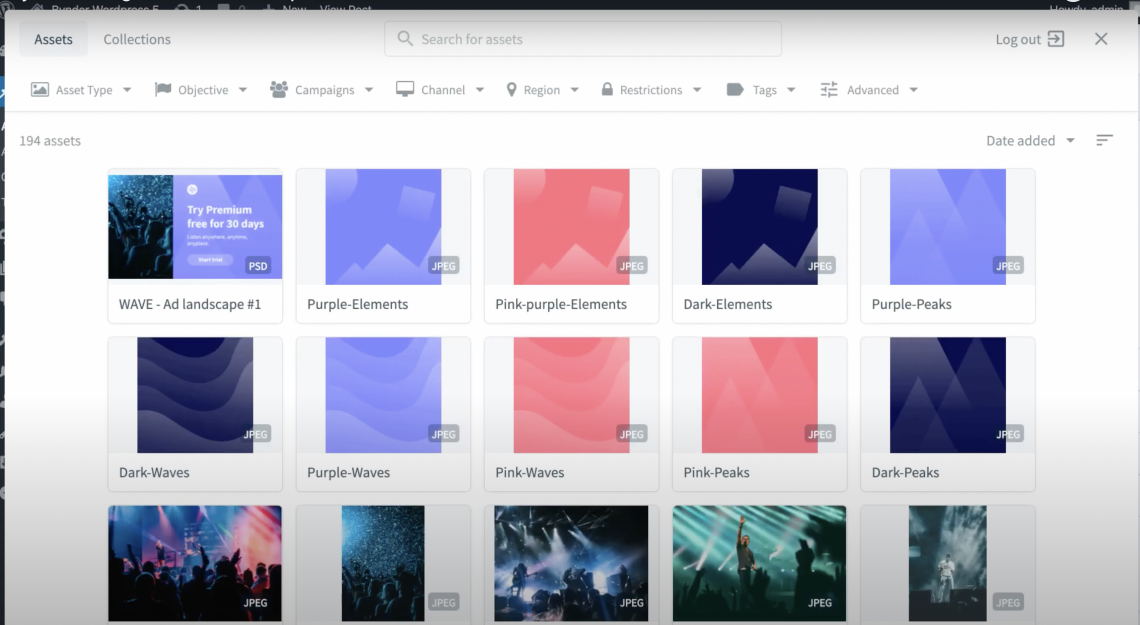 While Drupal has had a history of getting messy with media like images and videos, media are now largely standardized by the Media module that is enabled by default in Drupal 10's standard installation profile.

The media module provides an extensible media library where you can search and re-use images that exist on your platform. If your digital experience infrastructure requires you to manage hundreds of thousands of assets across your sites, Acquia DAM is available as an enterprise-class Digital Asset Management solution.

WordPress has handled its media library well from the start and comes standard with an intuitive media library. Unlike in the Drupal ecosystem, all plugins that handle media integrate neatly with the included media library. Drupal can still learn a thing or 2 about how WordPress has standardized media handling in its core.

For enterprise-class Digital Asset Management, there is a WordPress plugin available that integrates the Bynder DAM.