Depending on your needs, you can choose a more simplistic CMS like Wordpress. However, when it comes to businesses and enterprises, a CMS like wordpress won’t cut it. This leaves us with two popular open source options, TYPO3 and Drupal. Both are priding themselves to be the go to CMS for enterprises. In this article, I’m going to make a comparison of both TYPO3 and Drupal.

First things first. TYPO3 is an open source content management system that is written in PHP. Its author, Kasper Skårhøj, has released it in 1998. Drupal is also written in PHP, its author Dries Buytaert, first released it in the year 2000, making TYPO3 the older CMS between them both.

Drupal and Typo3 are the only CMS in the top 10 most used platforms that are aimed at Enterprise organizations. 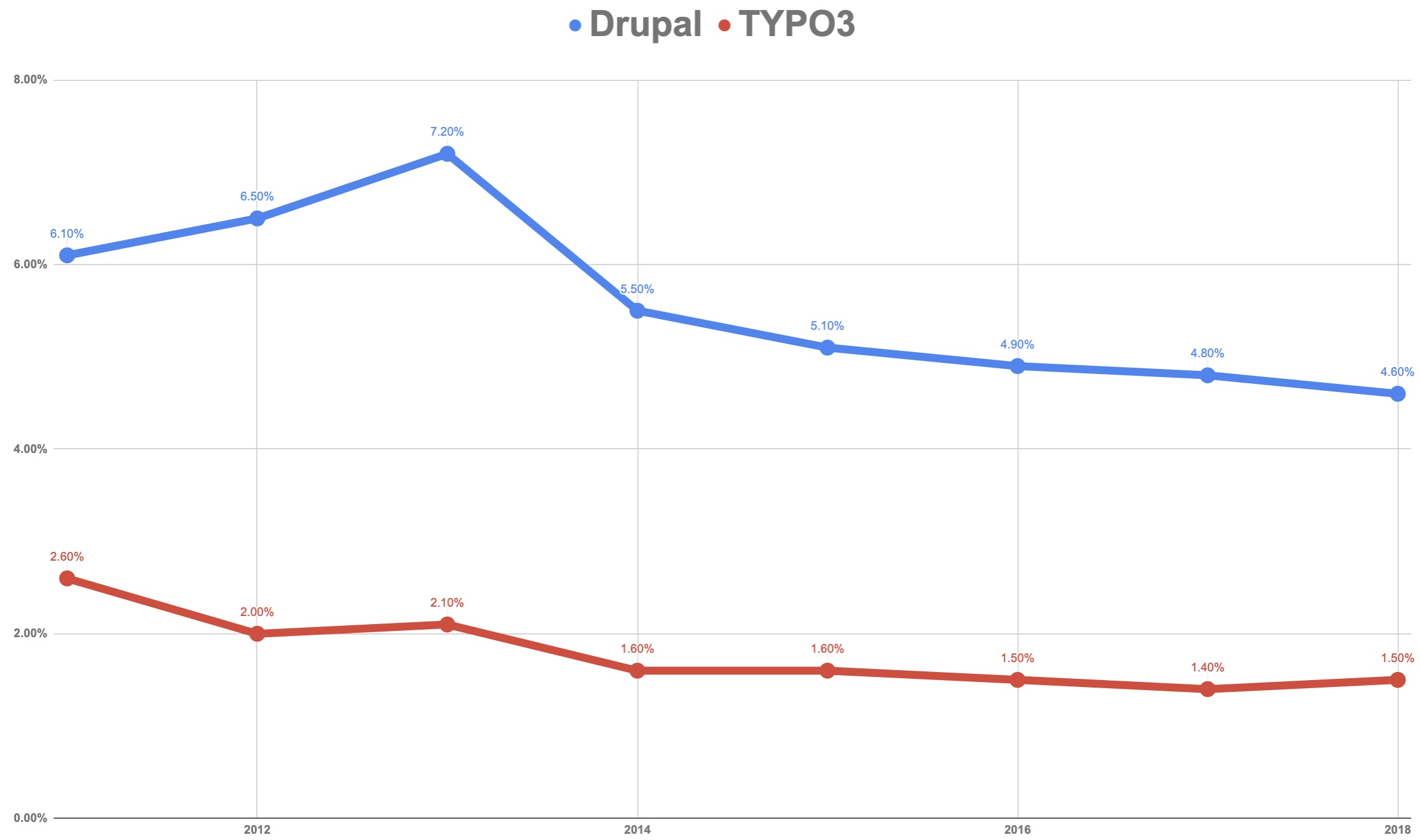 Drupal and TYPO3 are both open source. What this means is that the code is available to the general public. This results in developers being able to add different pieces of code by themselves, constantly improving the software. Both have dedicated communities which aim to further improve the performance of the CMS’s.

When it comes to the performance, both of these platforms have a wide range of modules and extensions. The modules and extensions are basically improvements on the core of both. Thus resulting in a high performance and flexibility on both sides. When it comes to extensions, TYPO3 has 60.000+ of them available, making sure that there is something specific to fulfill any users needs. Drupal also boasts a wide variety of modules, which gives the CMS the ability to cater to the needs of every user. Unlike Drupal, TYPO3 also runs an internal language called TypoScript. Users can leverage it to build additional elements including dynamic content.

Drupal allows the creation and management of different types of content such as text, blogs, videos, podcasts, images etc.

TYPO3 is also able to handle forms, tables, images and different pieces of multimedia. It also allows a lot of control over the layout of the page.

TYPO3 is famed for its massive availability in over 50 languages. However, Drupal is available in over 100 languages. This makes it even more impressive when it comes to the high degree at which Drupal is able to help with the needs of its users.

Security is one of the areas that both systems are putting a lot of effort in. Given the fact that they have to protect the costly data of large universities, enterprises and businesses, both are taking this matter seriously. Drupal and TYPO3 both have security teams that are constantly searching for vulnerabilities to report to the communities, while also working on fixing the issues. These are the reasons why both Drupal and TYPO3 are both trusted by enterprises and business when it comes to security issues. 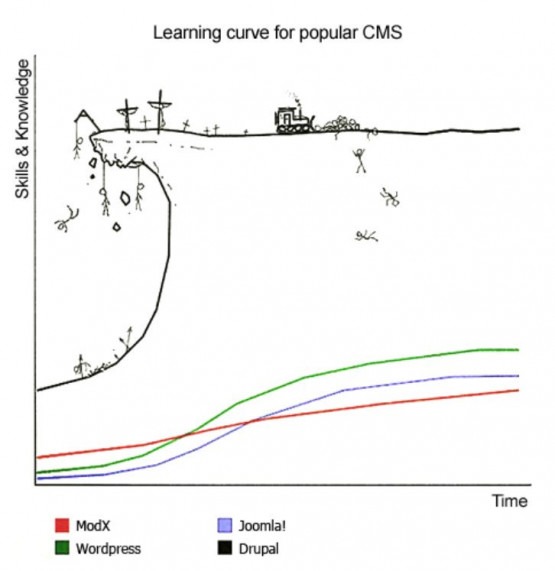 Compared to CMS that are not Enterprise-grade, Drupal and TYPO3 are both more difficult to be installed and be properly customized. Both systems are offering plenty of options for developers to be able to specifically customize the website to meet the user specific needs. This comes at a price however. The price to be paid for such high customizability comes in the form of a steep learning curve. This makes it hard for beginners to fully maximize the potential of both CMS’s. On top of that, learning TYPO3 seems to be more complicated than to learn Drupal. Because of the simple fact that TYPO3 uses also TypoScript. It is the internal language of the system which has to be learned in order to master the CMS.

In conclusion, both CMS’s are legit options when it comes to developing huge scale websites for businesses or enterprises. However, choosing one of them rests entirely on each user’s specific needs. Also, Drupal still has a larger market than TYPO3. Even though it is the younger of them both. This means that Drupal is able to better cater to the specific needs of its users, compared to its competition.